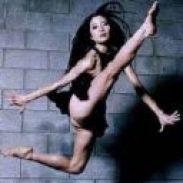 Toya B - Warrior Goddess has not received any gifts yet

I'm 5'2", a small package, and I've been a martial artist for almost 10 years, but I've had a deep love for the art my entire life. In the beginning, I wanted to learn Karate, and this is when I was still a child. At the time I didn't know what the term "martial arts" meant, but as I got older, I became more aware of what it was and what it meant. I became highly influenced by what I saw around me and what I saw on TV. Slowly I began to figure out what style was right for me to begin with, and it turned out to be Shaolin Kung Fu. Through studying that, I began to evolve not only as a person, but a martial artist, a warrior.

My main goal is to keep martial arts in my path, and not stray from it by being influenced by something that is not me. I do want to be one of those cage fighters, and fight someone like Gina Carano, strictly for the sportsmanship, but I also want to take what I've learned and convert it into films, since filmmaking is my career choice. I've been writing multiple martial arts/action scripts. What I want to do with that is raise the bar on what you see as a typical martial arts film, and finally do one set in a classic time period, that doesn't only star a Chinese cast, but a multi cultural cast. I'm a person that's all about unity and I want to bring that type of unity when it comes to a classic martial arts film.

Also, another main goal that has been etched in my heart for so long is to work with 2 beautiful men that has been my main and utmost inspiration and motivation, and they are Jackie Chan and Jet Li. They are like my rock in spirit. If it weren't for them I don't know where my motivation would have came from to keep me going strong for so long. I've already wrote scripts that I want to work on with Jet Li, and I've written scripts that I want to work on with Jackie Chan. And hopefully by the grace of God I will soon.

At the moment, I'm a student filmmaker, learning the entire ins and outs of filmmaking from script to screen, and trying to make a name for myself in this industry the best way I can. Networking is one the essential things I've come to know is very important, and I want to use that to my advantage to get my name and my talents out there for the world to see and know.

One of the things I've been doing for about 12 years, is screen writing. I like to consider that one of my specialties, since my writing skills doesn't stop at screen writing. However, I write in all genres, drama, comedy, action, martial arts, and horror etc. Currently I'm writing several scripts in those genres, mainly comedy, dramedy, action/martial arts, and horror. I'm also writing epics (battle types and such.) I could always see myself involved in something like that. And I aim to make it a reality. I'm also hoping to have my own production company that I can possibly merge with my stunt team. To be at the helm, in charge, of all of my projects, to have the final say and let NO ONE come in my way in the way I want to do things is highly important to me. For too long I've been listening to others and doing things the way they want me to do them, and finally with ALL of my career goals a change is gonna come.

I'm the Director/Coordinator for the beginnings of my own stunt team. I've been working around the clock figuring out how to make this a success and will need all the help I can get. The members I have so far are in different states so it will take a bit of time trying to get over this obstacle, but hopefully I will. Anyone from this site who is interested, don't hesitate to let me know. Any type of stunt is welcome, as well as any type of martial arts fighting style.

I also do various stunts. Contact me for more information.

You need to be a member of U.S.A & -JAPAN ATEMI INTERNATIONAL JIUJITSU FEDERTION to add comments!

Phil Logan said…
Hello Sista, Do you also have training with the knife(tanto) and handbo(palm stick)